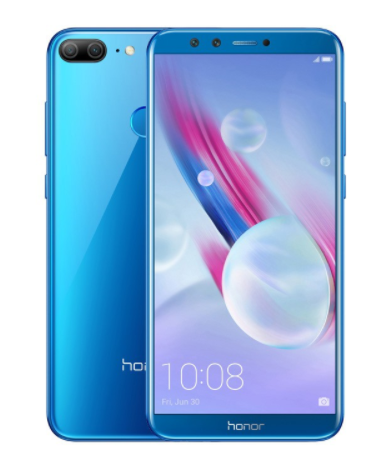 The highlight of the device is quad cameras which we first saw on the Honor 9i which was announced in October last year. However, the device also features a Full View Display and is priced at Rs 10,999. Honor 9 Lite comes with a premium 2.5D glass design complemented by well-rounded specifications. Let us find out if the device manages to stand out in the overcrowded budget and mid-range segment.

Honor 9 Lite impresses at the very first look. It reminds us of the iPhone 8 Plus with the mirror-like glass finish at the back which was also seen on the Honor 8 which was launched back in 2016. Amidst all the metal unibody design in its price segment, the Honor 9 Lite stands out with impressive built quality and elegant finish. The only downside here is the device uses a plastic frame to keep the cost low, even the Volume and Power buttons are made of plastic.

The device is quite compact and fits well in the hand although, one hand usage is still difficult with 5.65-inch display in a 6-inch body. The device weighs only 149 grams and is about 7.6mm on the thickness.

The device is available in three color variants – Sapphire Blue, Glacier Grey, and Midnight Black. The blue variant is the one I like the most. The 2.5D curved glass at the back is highly glossy and reflective attracting a lot of smudges. The device offers comfortable grip with rounded corners and curved back but it can be incredibly slippery at times.

The 18:9 displays were trending in 2017, and in 2018 it has become one of the basic necessity for any smartphone manufacturer. Thus, the Honor 9 Lite offers you a very 2018 feel with dual cameras and a tall 5.65-inch 18:9 Full HD+ display with a pixel density of 428ppi. The display can be scaled down to 720p to improve battery life. It is a vibrant display with good color reproduction but the viewing angles are not that great.

This is where things start to get interesting. The Honor 9 Lite sports a dual camera setup on both front and rear. It has a 13MP lens along with a 2MP to capture the depth information or produce the bokeh effect. The 2MP secondary lens also helps in improving the low-light performance.

Although, just like other devices in this price range the Honor 9 Lite also struggles. It takes a few extra seconds to focus which sometimes result in blurred pictures. I hope Honor might improve it with an update.

The camera offers features like Wide Aperture and Portrait mode but unlike other Honor phones, there is no option to adjust the level of blur. We don’t expect amazing bokeh shots like your iPhone or Pixel from a smartphone in this segment. The camera captures a decent amount of detail in the shots and it aims to give a shot of premium features on a budget to the people.

The Honor 9 Lite offers 1080p video recording but there is no stabilization to offer, which common in this price segment.

Overall, the camera performance is good and it does not disappoint.

Honor 9 Lite comes with Android 8.0 Oreo out of the box even when a lot of smartphones still come with Android Nougat (like the Redmi Note 5). It comes with Honor’s custom skin named Emotion UI 8.0 which is a successor to EMUI 5.1. Yes, the company has fast forwarded the version number to match the Android version which is good. There is some usual bloatware that we keep seeing on the Honor devices.

EMUI 8.0 runs fairly well and offers features like Face Unlock, which makes it the most affordable device to offer Face Unlock. There is a WiFI+ feature which automatically switches between Wi-Fi or Mobile Data, whichever is stronger.

The Honor 9 Lite comes in two variants, one with 3GB of RAM and 32GB of internal storage and the other is 4GB RAM and 64GB internal storage. The device is powered by Huawei’s own HiSilicon Kirin 659 chipset which we saw earlier on the Honor 7X.

The phone performs well in regular usage. Huawei’s custom skin looks well optimized and easily handles anything thrown at it. If you are not into gaming, the basic 3GB RAM variant would just be fine for you.

Multitasking is smooth on the device and most games run well. However, I noticed some lag while playing graphics intensive games and the device also got a bit warm in the upper half.

The Honor 9 Lite packs in a 3000mAh battery which supports company’s fast charging technology called Super Charge. The device comes bundled with a 10W charger and takes a little over 2 hours for full charge. The battery life is average though, you can scale the Display to 720p to improve it a bit. It might last a day at the work with moderate usage. The device features Smart Power 5.0 which optimizes the device to get the maximum battery juice.

The Honor 9 Lite sports a micro USB port for charging and data-syncing instead of the USB Type-C, which is common in this price segment. The device has a 3.5mm headphone jack and comes bundled with in-ear earbuds in the box which is rear these days.

There is a hybrid setup which can accept 2 nano SIM’s or a SIM and a micro SD card, up to 256GB. The fingerprint sensor lies at the back and is very responsive, just like all the other Honor phones. Let’s take a look at the spec sheet:

Here is a short video by GeekyRanjit on Honor 9 Lite:

The Honor 9 Lite is an affordable budget oriented device which checks on all premium features of 2018 like, exquisite design, stunning looks, latest Android version, 18:9 Full View display and dual front and rear cameras.

If you are a moderate user and are looking to buy a stunning looking phone on a budget, the base variant of Honor 9 Lite which is priced at Rs 10,999 would do the trick. The higher variant of Honor 9 Lite is priced at Rs 14,999 and I personally think that Huawei is overcharging for the extra RAM and storage. The 4GB RAM variant will compete with smartphones like Redmi Note 5 Pro, Nokia 6 2018, Mi A1 and Honor 7X which was launched last year.

Honor 9 Lite offers a good overall performance and is a good buy at Rs 10,999. However, I feel the 4GB variant is slightly overpriced. The camera performance is also good and the front camera can be called the best in this price-bracket.

So, is it the best budget device ever? The answer is yes right now it is the best device on a budget.

Are you planning to buy a new phone?

Will you consider Honor 9 Lite?

Do let us know in the comments below!!