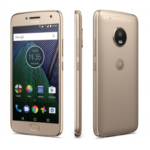 Motorola has launched the 5th generation of the Moto G at Mobile World Congress in February. Moto G5 and G5 Plus are both available in India now. Moto G5 is exclusively available on Amazon India for Rs. 11,999, while Moto G5 Plus is exclusive to Flipkart.

The Moto G family is known for their budget oriented devices and it has been a bestseller in India. We will talk about Moto G5 Plus in this article.

The smartphone comes in two color variants: Lunar Grey and Fine Gold. It features a 5.2-inch Full-HD IPS LCD display at the front. Similar to Moto G4 Plus, it has front firing speakers along with earpiece. There is a fingerprint sensor at the bottom of the screen which now doubles as a home button.

The new Motorola device comes in an all metal frame with a non-removable back. The phone is 9.7-mm thin, and tips the scale at 155 grams. It is to be noted that the device has plastic edges to accommodate the antenna, but it also provides a non-slippery and firm grip to the phone.

At the bottom, there is a USB connector with a 3.5mm headphone jack. The left edge holds the volume rockers and a power button. The SIM tray sits at the top edge while the right edge remains clean.

The device packs some impressive specs considering the price, and despite low benchmark scores handles gaming and multitasking brilliantly. Thanks to the near stock Android Nougat experience. Here is a look at the specs:

The software experience is amazing on the phone and you will not feel like you are using a mid-range device. The device is first to feature Google Assistant which was earlier exclusive to Google Pixel devices.

The front camera is a 5 MP wide-angle lens with f/2.2 lens, display flash, and Beautification mode.

The device is capable of capturing 4k videos at 30fps.

Moto G5 Plus performs well under low light and artificial lighting conditions. It was compared with Samsung S7’s camera which had a great camera with the same aperture, but the camera lens was different.

Really want to hear the verdict?

I think you already know it. It is the best budget phone in my opinion. Although, some might say that Motorola should have used a USB Type-C but I don’t think its much of an issue. Is it?

I will not say that the Moto G5 Plus is cheap, but it offers the best value for money.

In case you have any questions, feel free to ask us in the comments.