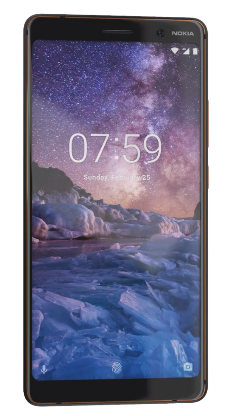 HMD Global the company behind the iconic brand Nokia has announced 2 new smartphones recently, the Nokia 7 Plus and the flagship device Nokia 8 Sirocco. Both the devices were announced at MWC this year and HMD Global has now made it official. With everyone moving to the 18:9 aspect ratio the last years Nokia 5, Nokia 6 and even Nokia 8 looked dated in terms of design and specifications. We were expecting the company to deliver something upfront with the market and the company delivered.

The new Nokia 7 Plus has it all, an updated design with 18:9 aspect ratio and a dual camera setup as well. The device is equipped with a Qualcomm Snapdragon 660 processor and is enrolled in Google’s Android One programme which promises software updates for more than 2 years. Talking of the processor, the Snapdragon 660 is one of the latest processors in 600 series and is known for its performance. Thus, you can expect great performance with good battery life on the device.

Nokia is known for its build quality and the brand has retained the same impression even today. The Nokia 7 Plus feels solid in hand as built from 6000 series aluminum with a ceramic-feel coating at the back to give a better grip on the device. It is one of the first Nokia devices to sport an 18:9 aspect ratio with curved edges which reminds us of the Google Pixel 2 XL. The antenna lines are not visible at the back and the ceramic coating feels smooth to touch but it is not slippery.

In order to make the device stand out, the company has used copper accents on the edges, around the fingerprint sensor and the camera module. The camera module at the back is slightly protruding like the most smartphones these days. The copper trim not only adds to the beauty of the device but also protects the camera glass from getting scratched while keeping the phone on its back. The brand logo at the back is also beautifully accentuated with copper making the device stand out. The smartphone will be available in black and white color variant. The device is a little bit on the heavier side thanks to the aluminum shell which gives it a solid feel.

The Nokia 7 Plus does not lack out on a 3.5mm headphone jack and you also get in-ear headphones in the box. The device is powered by a massive 3800mAh battery which can easily last 2 days with moderate usage, thanks to the Snapdragon 660 processor again. At the bottom, there is a USB Type-C port with a microphone and a speaker grille. The copper metallic buttons on the side are clicky and offer good feedback.

At the back, the 7 Plus sports dual camera module with Zeiss branding with dual tone LED flash followed by the fingerprint sensor. Below there is a Nokia logo followed by the Android One branding at the bottom.

The new Nokia 7 Plus features a 6-inch Full HD+(2160X1080 pixels) IPS LCD Display. The 18:9 aspect ratio makes the display look big offering great viewing angles and good color reproduction. The display is not the best in class but it won’t let you down in terms of performance.

The LCD is protected by a Corning Gorilla Glass 3 which is not the latest but does a decent job. The device is bright enough in direct sunlight and goes dim in low light situations, thanks to the ambient light sensor on the device. However, I would recommend a good screen protector, the one which covers the edges as larger displays tend to crack easily.

Other features like Adaptive Brightness, Night Light and Ambient Display which shows notifications even when your phone is locked. Double tap to wake up is another nifty feature but I kind of missed the Notification LED on the device.

The new Nokia 7 Plus shows a great improvement in the camera department. I noticed a huge difference in the low light photography when compared to the older Nokia phones like the Nokia 8. It really took me back to the old Nokia days. Coming back to the device, the 7 Plus has the usual Nokia modes like Live Bokeh, Pro Mode, HDR, and Panorama.

The performance is backed by dual rear-facing cameras that boast of 12MP and 13MP sensors powered by ZEISS optics. The 13MP sensor is a telephoto lens and is capable of clicking pictures at 2X zoom which turns out to be better than any other devices in the same class. The 12MP sensor has an aperture of f/1.7 while the 13MP sensor has f/2.6 aperture. Both the sensors are quick to focus and capture an image.

1.4um pixel size and wide apertures contribute to the low light photography. The device comes with a dual LED flash to help focus on the subject in extreme low light condition. However, the images taken at 2X zoom in low light does suffer and the device gives preference to colors over sharpness.

The front-facing 16MP shooter is a pleasure to use, it automatically enhances the images to make them social media ready. The 7 Plus gives you all the basic features such as Timer, HDR Auto, Flash, and Bokeh mode. Not to forget the Bothie mode which allows you to use both front and rear camera at the same time from a single screen. Sounds great, Right?

That’s all about the optics, but when it comes to video recording the 7 Plus comes with OZO audio which promises great audio output in the videos and the electronic stabilization does a pretty good job.

As we already know, the smartphone falls in Google’s Android One program. The software on the device is exactly the same as the stock Android found in the Pixel devices. The device is powered by a Snapdragon 660 which is powerful enough to run the heavy-graphics apps like a breeze even in a split screen mode.

The 7 Plus truly justifies its tagline “A phone you can rely on“.

HMD Global has paid special attention to the battery in this device. The new 7 Plus has one of the best and long-lasting battery life. It comes with a 3,800 mAh non-removable Li-ion battery which can easily last for 12 hours. The device gave us around 5 to 7 hours of screen time.

The 7 Plus also comes with a fast charging support with nifty little power management tricks in the battery settings menu to increase the battery life. If you are someone who attends or makes a lot of calls from your mobile phone, you will love the battery life.

Last year, Nokia faced a lot of criticism for outdated specs on the entire smartphone lineup. This time Nokia is looking to woo the customers with Top of the line specs matched with great software experience. The new Nokia 7 Plus is one of the first phones to launch with Qualcomm Snapdragon 660 Octa-core processor in the country. It is the most expensive processor in the Snapdragon 600 series with 4 cores clocked at 2.2GHz while the remaining 4 are clocked at 1.8GHz. It comes with an integrated Adreno 512 GPU. The device has a 4GB RAM and 64GB internal storage which can be expanded up to 256GB via a microSD card. The device has a Hybrid Dual-SIM tray which will restrict it to a single SIM if you choose to use a microSD card.

Check out the video below by Android Authority :

The Nokia 7 Plus is built like a tank, has a beautiful design and a huge 3800 mAh battery. In other words, Nokia 7 Plus is a performer. Nokia has managed to make a perfectly balanced mid-range smartphone with good specs and a great design.

The phone has a large 6-inch IPS LCD Display with a resolution of 2160 X 1920 at 403 PPI which is protected by Corning Gorilla Glass 3. The device comes with a 12MP + 13MP dual rear-facing camera at the back and a 16MP camera at the front. The 13MP sensor acts as a telephoto lens and is capable of 2X zoom.

The device is covered with Android One promise from Google which promises time to time updates from Google and the device runs on stock Android which has a Pixel-like UI.

Let’s have a look at the spec sheet:

Here is a video review by Geekyranjit for Nokia 7 Plus:

For an average smartphone user, the Nokia 7 Plus could be the best bet in the market right now. The company has finally nailed it with great design and perfectly balanced specifications. The 18:9 aspect ratio display is immersive and trending, the processor is powerful and handles everything thrown at it smoothly, the software is smooth, camera performance is good and the battery life has its own advantages.

We never noticed the slightest lag in the device even while playing the heavy-graphic games like Asphalt 8 and PUBG. The processor and the RAM are well optimized to give the best experience. Although, I believe the smartphone is a bit overpriced. If it would have been priced under Rs 24,000 it would have been a great value for money device.

If you are really looking to buy the device and not able to find it on Amazon, you can head to Nokia’s official website in order to purchase it.

That’s all about the Nokia 7 Plus for now!!

Tell us what you think about the device? Have questions? drop them in the comments below!!