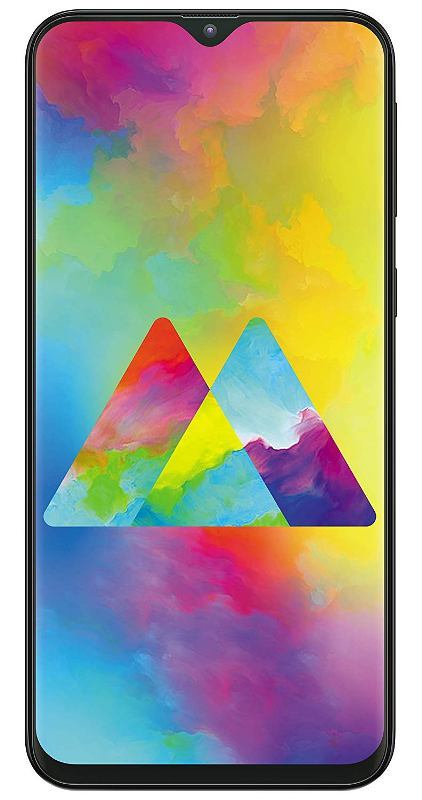 Samsung’s J Series and On Series was no match to Xiaomi’s Note series. With Galaxy M series Samsung has finally struck a balance between the price and Specification to reclaim the mid-range segment.

From the design perspective, the back doesn’t inspire much. There is a dual back camera on the top left-hand side with a flash. There is a fingerprint sensor in the middle with Samsung branding below it.

Furthermore, the back is made of plastic but the quality is good. As far as the display is concerned, the Infinity-V display is impressive and clearly stands out at this price point. The V-shaped notch hides a front-facing camera with an earpiece and sensors. The poly-carbonate body feels good to touch and the curved sides offer a perfect fit in the hand.

The bezels are fairly thin but I would have loved a slightly smaller chin at the bottom. On the right edge, there is a volume rocker and a power button. While the right edge houses the SIM card tray. At the bottom, there is a USB Type-C port with a speaker grill and audio jack.

Samsung is using a PLS TFT Panel for the M20 and it is a 6.3-inch Full HD+ (2340 x 1080p). PLS (Plane Line Switching) is Samsung’s proprietary display which is similar to IPS (In-Plane Switching) technology. Do not judge the display by the use of the term TFT, Samsung’s PLS Technology has done the work for them.

The Display offers great viewing angles, punchier colors and good outdoor visibility. It will catch your eye the moment you turn on the phone. It’s adequately bright but cannot be compared to the AMOLED panels.

The Samsung M20 has a good display according to the price range and will give a tough competition to the competitors.

In terms of hardware, the Samsung Galaxy M20 is powered by Samsung’s own Exynos processor. Exynos 7904 is an octa-core processor clocked at 1.6GHz. It is a combination of Cortex A73 and Cortex A53 cores which makes all the difference. The Exynos 7904 is at par with Snapdragon 636 chipset. While the 636 felt slightly better in terms of the gaming performance.

It is available in 4GB/64GB variant which is the most common configuration for the budget devices. Although, storage can be expanded via a microSD card as the device has a dedicated memory card slots along with dual nano-SIM cards. Both the SIM cards support VoLTE.

Day to day performance is pretty good on the device. The M20 Exynos 7904 has a Mali G71 MP2 GPU which handles games very well. M20 handled games like PUBG and Asphalt very well with little or no lag at all.

Moving on, let’s have a look at the specifications of the phone:

Gone are the days of TouchWiz UI which was heavily loaded with bloatware. Now, Samsung has a much smoother and modern UI which is highly customizable and somewhat similar to what we have seen on their high-end phones.

The UI comes with a Swipe-up style app drawer with no lags or hiccups. There are some pre-installed apps in the UI like Box,  and a host of other apps from Google and Microsoft. While most of these apps can be removed, you’re forced to keep some app like the Microsoft suite of apps.

Those of you who have used the Samsung phones in the past will notice new Lockscreen stories feature on the Samsung Galaxy M20. Samsung has partnered with Glance to source feed from different publications on your lock screen.

Do you know what the best part is? It can be disabled!!

The M20 supports two SIM cards and it also offers to clone apps like Whatsapp to use multiple accounts on the same device. It comes with a separate micro-SD card slot which is great in this price range.

The biggest let down in M20 is that it comes with Android 8.1 Oreo while, I would have loved to see Android Pie out of the box.

The Samsung Galaxy M20 sports a combination of a 13MP primary sensor and an f/1.9 aperture at the back along a 5MP ultrawide camera. The secondary camera comes in handy for capturing a large group of people or landscapes in a single frame. It has a 120-degree field of view.

The camera performance is adequate in ambient light. But it might look a bit overexposed at times in artificial light. The wide-angle camera is a nifty addition and is unique to M20 in this price range.

The limited dynamic range of the primary camera extends to the secondary camera as well but it is more evident in the ultrawide camera. Low-light performance on the camera disappoints and aggressive noise reduction further reduces the quality of the images.

The M20 sports an 8MP front-facing camera for selfies with an f/2.0 aperture. The phone takes some decent selfies in daylight but struggles in the low-light environment. Other options like Live Focus and In-Display Flash helps you

To sum up, the camera performance is decent on the device and that what you expect from a phone in this range.

Things change drastically here, Samsung has done a great job at optimizing the Samsung M20 for better battery life. The 5000mAh battery easily lasts up to two days of usage.

The best part is, the M20 features a USB-C port and supports fast charging. The inbox charger takes 2 hrs and 15 minutes to fully charge the device.

Why Should you buy the Samsung Galaxy M20?

I think this is a question in everyone’s mind because the market is dominated by Chinese smartphone manufacturers like Xiaomi and Honor.

Samsung has finally managed to tick all the features that a smartphone buyer is looking in this price range. The device has a vibrant display, fantastic battery life and satisfactory performance.

While the phone is an absolute winner over the Honor 10 Lite, the Redmi Note 6 Pro packs a bit more power under the hood. However, the M20’s larger display and bigger battery make it a winner for me.

You will love the device if you watch a lot of videos on youtube and other media apps. Considering the fact, that the M20 comes with a Widevine L1 certification for HD streaming and Dolby Atmos 360 surround sound.

If you are planning to buy Samsung Galaxy M20, do not forget to have a look at some of the screen protectors and back covers at Amazon India. You might face some difficulty while finding them at a market near you.

That’s all for now!! What is your view about Samsung’s M series phones?

Let us know in the comments below!!